As a research scientist in the Department of Earth Sciences at the University of Toronto, I was surprised to learn of the location of Freymond’s proposed quarry site simply because it does not make sense from a hydrological, ecological or geological perspective.

As Ontarians, we should take potential threats to our fresh water supply very seriously. The proposed quarry site is located in a watershed with no less than four spring-fed lakes, all found within a 2 km radius of the site (2).  These lakes are relatively small, relatively deep, are spring-fed and are at a relatively high elevation in a region known for glacio-lacustrine landscape features (3).  The crux of my argument is that these lakes would be without water if it were not for the existence of fissures (cracks) in the impermeable material found below or around the lakes.

The area surrounding the lakes is covered by either no soil (i.e. with exposed bedrock) or very thin soils, therefore must contain fissures to allow groundwater to fill these depressions, with incoming groundwater commonly referred to as “springs”. To be very clear here, the hydrogeological report produced by Freymond’s consultants did not identify the existence of these lakes anywhere in the report (4-5).

Perhaps this is because if the lakes were not there, then the location of the proposed quarry site would have had much less potential for serious hydrological risks, and then it would have been reasonable to agree with the consultants’ conclusion that faulting (fissures) within the site’s bedrock is likely to be minor. In fact, if these lakes did not exist, I likely would not be commenting on the proposed location of the quarry.

But ignoring the lakes doesn’t make them go away, nor does it allow us to pretend the fissures in the bedrock don’t exist. In order to determine the true hydrological risks the quarry could pose, additional hydrological tests must be conducted (6).

To re-iterate, blasting in bedrock known to contain fissures is a risky prospect, especially when the necessary background information into the location or nature of these fissures has not been determined.

2) The world’s biological resource of trout (that reproduce naturally and do not rely on stocking for their survival) can only be found in regions within northern North America.

The Province of Ontario has approximately 250,000 lakes, and of those, less than 1% have the conditions necessary for trout reproduction (1).

Although not considered an endangered species, trout populations are extremely sensitive to environmental conditions affecting their habitat (water) and possibly affecting their reproductive process (i.e. low-frequency sound). In 1985, the Ontario Municipal Board (file number 12T-83002, 1985)1 sided with the Ministry of the Environment and the Ministry of Natural Resources in preventing Bancroft Lumber Limited from developing an additional 8 lake-side properties on the shores of Jeffrey Lake because the potential risk to naturally-reproducing populations of trout was considered too high.

The OMB report went so far as to describe Jeffrey Lake as having a rare set of (biogeochemical) properties that facilitated the restricted development of this unique water body.

The other three spring-fed lakes in the area of Jeffrey (Bay, Banner and Spurr Lakes) can also be described by a similar series of rare characteristics including spring-fed, relatively deep for their small size, a limestone-based foundation offering buffering capacity against acidifying agents (i.e. resistant to acid rain or other acidifying conditions), and excellent conditions for natural fish reproduction (i.e. maintenance of a minimum daily water temperature).

Unfortunately, without knowing the full potential risks of the quarry on regional hydrology, it is difficult to predict the extent to which neighbouring aquatic ecosystems in Faraday will be negatively disturbed.

3) As a pragmatic Earth scientist, I recognize the need for exploitation of aggregate resources for maintaining regional infrastructure (i.e. road construction, etc.).

Consequently, the need for aggregates is a high priority for the Province of Ontario, so much so that a series of reports (published in 2010) by the Ontario Geological Survey identified ideal sites for future extraction of aggregate resources in Ontario, including the county of Hastings (7).

In that report, locations were described as being either primary, secondary or tertiary, with the primary sites thought to contain the highest quality and quantity of aggregate resources.  The areas not falling into these three categories were deemed as either being restricted by high environmental risk or by the probability of not finding aggregate resources.

Surprisingly, the proposed location of Freymond’s quarry site falls near a region only deemed a secondary aggregate source but one that is surrounded by an area considered too environmentally-sensitive or lacking aggregate resources (7). With the existence of the four spring-fed lakes, I suggest the reason is related more to the former than to the latter.

Even from a geological perspective, therefore, the likelihood of finding top aggregate resources in the proposed quarry location is not high.

Combine this with the possibility of risk to the region’s hydrology and aquatic ecology one has to conclude that the location of the proposed Freymond quarry site does not make sense from a purely scientific perspective.

4) The uniqueness of spring-fed lakes should be celebrated!

Those responsible for promoting Bancroft tourism should take advantage of a watershed containing not one but four spring-fed lakes. One of these lakes, Banner Lake (Figure 1a-h), has public access, contains vistas reminiscent of Algonquin Park, interesting organisms such as the carnivorous sundew plant that traps and dissolves unsuspecting insects caught in its sticky leaves, and shoreline fishing for bass as told by local residents that can be in excess of 14 inches long! You can portage and trout fish offshore.

From a walking trail that scales the steep shoreline, you can see the remnants of the lake’s glacio-lacustrine past, in specific, a landscape feature called an “erratic” that was produced as a result of moving meltwater following the end of the last Ice Age (~15-13,000 years ago).

The erratic is a large boulder smoothened from the erosional force of rocks bouncing in water (much like a pebble bouncing along the floor of the York River).

The boulder was deposited on the cliff overlooking the lake and is now completely surrounded by mature, mixed hardwood forest; a truly unreal forest feature to see first-hand.

Following your hike, take an invigorating swim in the spring-fed aqua-blue waters of Banner Lake and you’ll be converted for life!

(2) Spurr Lake and Bay Lake are partially filled by overland runoff because they lie at an elevation lower than Jeffrey and Banner Lake.

(5) Spurr Lake is mentioned as being the closest lake to the proposed quarry site, but the spring-fed origin of the lake is decidedly omitted from the report.

(6) Currently, I have two letters (one with an anonymous author) submitted to Brian McComb, Director of City Planning in the County of Hastings that identify some of the tests that I and others feel should be performed in advance of the completion of Freymond’s application.

Figure 1. Some of the unique and interesting features of a kettle-like lake such as Banner Lake just outside the town limits of Bancroft. (a) A view of the lake from the shoreline, (b) highlighting the aqua-blue colouring of the spring-fed water, a sampling of some of the colourful organisms that you may encounter including (c) deep red fungi (mushrooms), (d) a carnivorous plant called a sundew, (e) a butterfly atop a globe thistle, and (f) a green mossy carpet. A lichen-covered erratic (g) is observed in the middle of a mature forest (h). On a hiking trail between Banner and Jeffrey Lakes, the short life-span of a surface stream ends at a crevice in the landscape (i). All photos by SA Cowling. 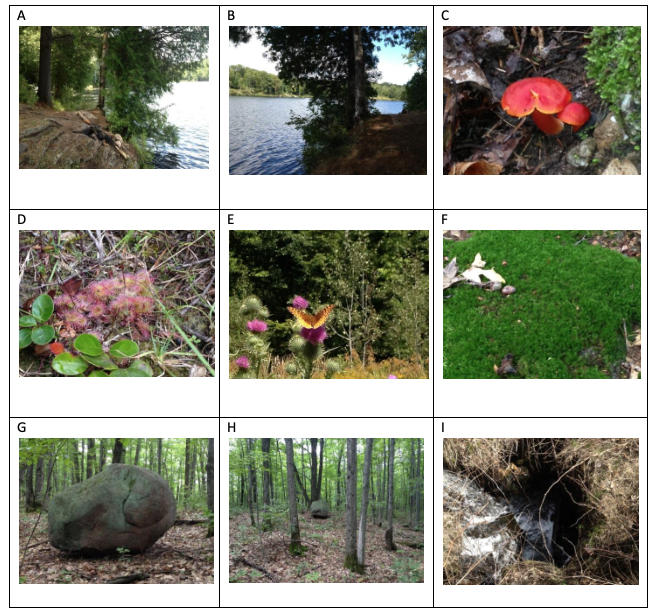 Help us protect your slice of perfection in Bancroft.

Help! We only have until end of June 2019 to fundraise all the expert opinions we need to show Hastings County that they have to demand more information to protect our freshwater supply, the environment, existing tourism businesses, and the many many year round and seasonal residents safe from the next 50 years – the proposed lifetime of the Freymond/Fowler quarry. Donate to our GoFundMe page to help. If you require a tax receipt we’ve also set up NoSmallChange donation site just for you.